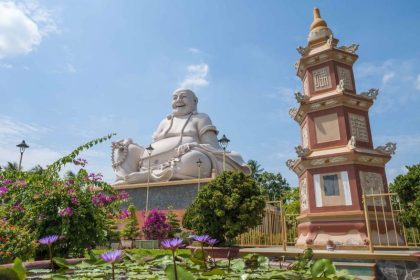 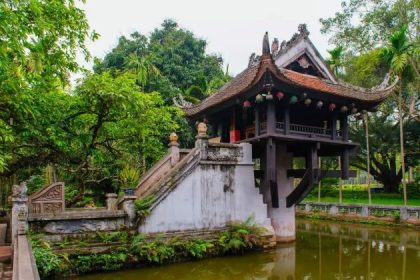 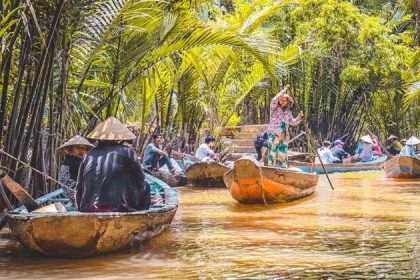 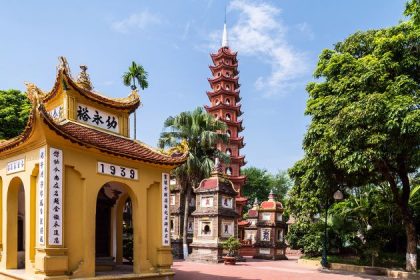 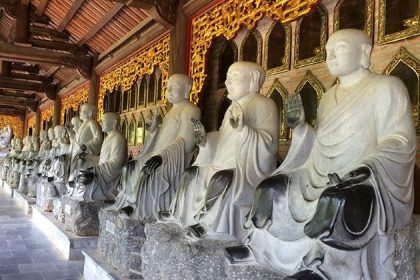 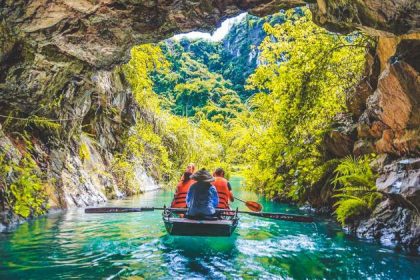 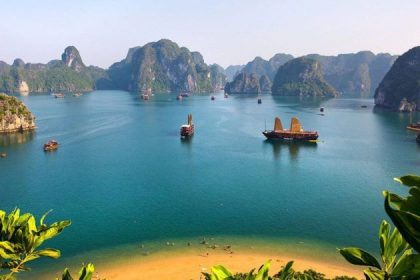 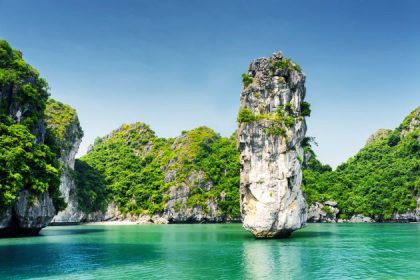 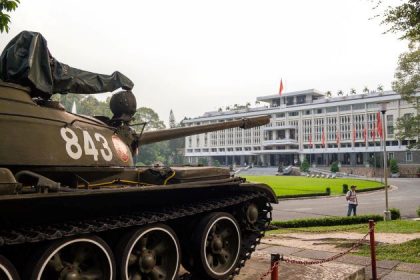 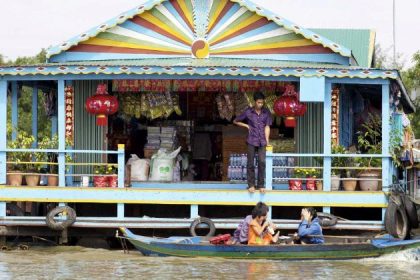 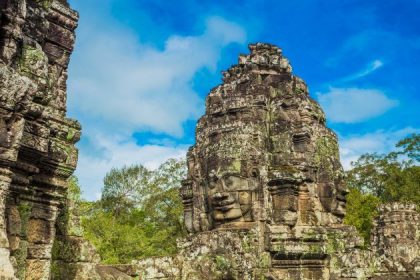 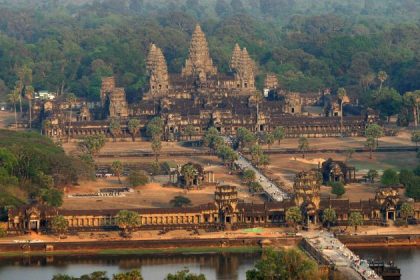 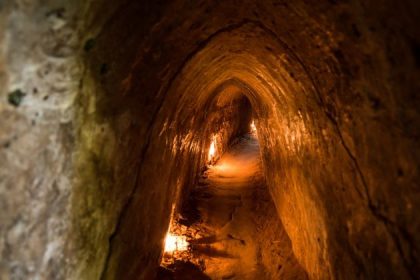 Immerse yourself in an adventurous Vietnam Cambodia holiday package into the heart of these two countries which showcases stunning natural wonders and long-standing cultures of both mighty Cambodia and mesmerizing Vietnam. From the awe-inspiring landscapes of floating villages in the great Tonle Sap Lake to the exceptional architecture of mystic Angkor temples, from otherworldly sceneries in the magic Halong Bay to a visit to the legendary Cu Chi Tunnels, this journey covers a lot of activities for you to experience.

Highlights of this Tour

On Hanoi arrival, you will be welcomed at the airport and transferred to the hotel for check-in and relax.  In the afternoon, join in a Hanoi city tour. Your first visit will be the Ho Chi Minh Complex with Ho Chi Minh Mausoleum where the greatest Vietnamese President rests in peace. Then explore One Pillar Pagoda – the most iconic temples in Hanoi as well as the yellow Presidential Palace to understand more about French colonial architecture. Later, transfer to Temple of Literature – the first University of Vietnam which was constructed in the 11th century. 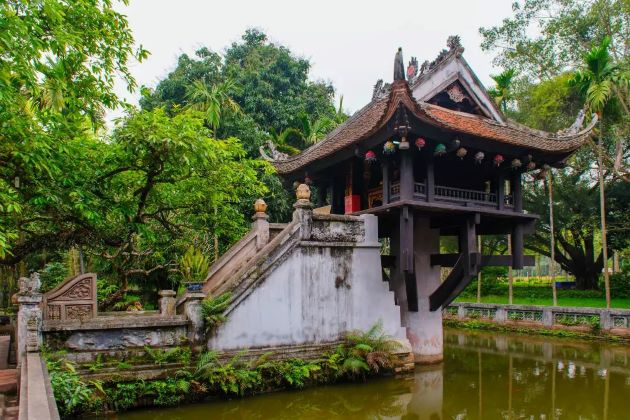 Afterward, transfer to Tran Quoc Pagoda – the oldest religious construction in Hanoi, dating back to the 6th century. This Buddhist shrine has witnessed the ups and downs of Hanoi city over its 1000 years old. Return to the hotel in the late afternoon. Overnight in Hanoi 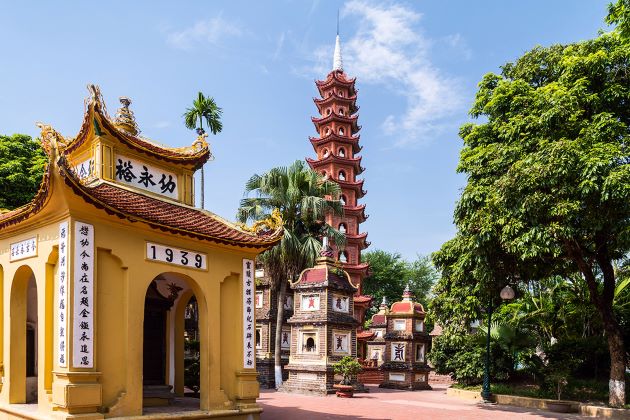 In the morning, you will be picked up at your hotel then depart for Ninh Binh, the ancient capital of Vietnam to discover Bai Dinh Pagoda and Trang An eco-tourism attraction area After about 2 hours and 30 minutes of traveling, arrive in Buddha Sanctuary at Bai Dinh Pagoda, the biggest pagodas in Vietnam which are preserving about 500 Arhan statues and the biggest bronze Buddha statue of 10 meters in height and 100 tons in weight. 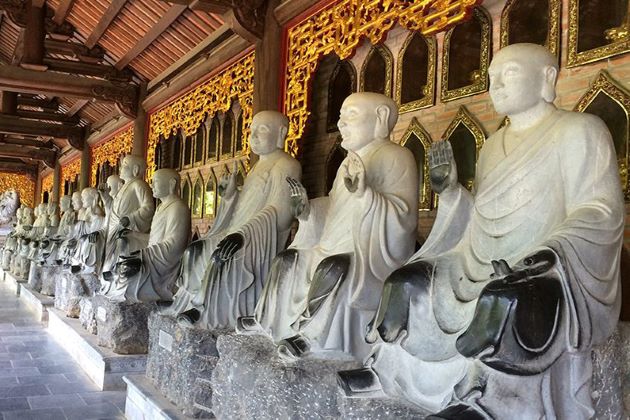 After lunch at a local restaurant, visit Trang An ecological site with a boat trip through mysterious cave chains: Lam cave, Thanh Truot cave… with 3 spiritual attractions (Cao Son temple, Suoi Tien temple, Vu Lam Historic Area). Afterward, return to Hanoi to check in the hotel. Dinner on your own. Overnight at the hotel in Hanoi.

In the morning, enjoy your breakfast at the hotel and take a short rest before leaving for Halong Bay by shuttle bus. At noon, arrive at the bay and start your visit around this bay and experience the magic of the wonderful UNESCO World Natural Heritage Site. 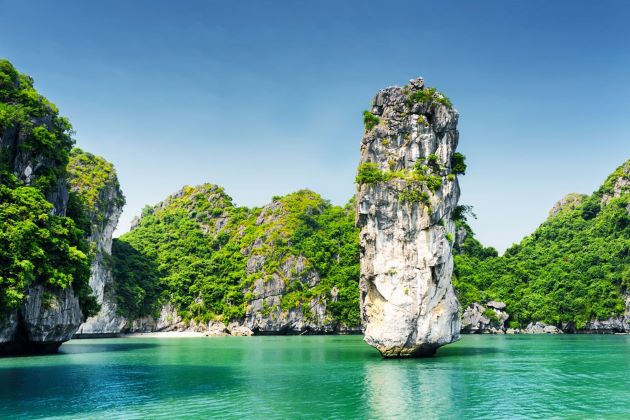 From the harbor, embark the boat for a cruise trip among the numerous limestone karsts rising from the emerald water. You will have some stops to visit a mystic grotto of spectacular stalactites and stalagmites, to swim or kayak at the clean and clear water, and to conquer Titop Mountain for a panoramic view of Halong Bay. Enjoy your dinner and peaceful night at the cruise ship. 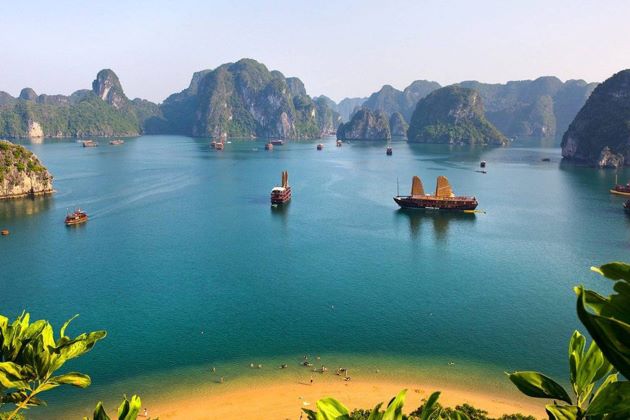 After breakfast, sunbathe and relax in the fascinating background of the bay. After lunch, disembark the cruise ship and transfer back to Hanoi. On Hanoi arrival, you will be transferred to the airport for the domestic flight to Ho Chi Minh City. On Ho Chi Minh City arrival, you will be welcomed then move to the airport for check-in at the hotel and relax.  Dinner on your own. Overnight at the hotel.

Today, your guide and driver will pick you up at your hotel after breakfast. Then you will visit the following attractions:

The Reunification Palace witnessed the end of the Vietnam American War on April 30th, 1975 when the puppet South Vietnam government officially ended when tank number 843 of the North Vietnamese Army crashed through its gate. 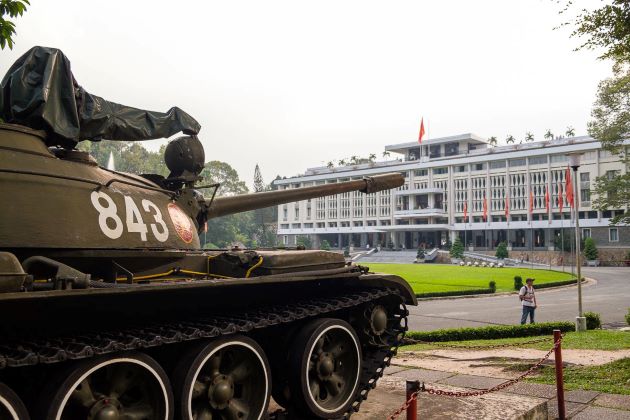 War Remnants Museum: It is formerly known as the Museum of American War Crimes to show a poignant display of the futility of war with a large and priceless collection of the black and white photographs dedicated to both foreign and Vietnamese journalists as well as photographers about the war. The courtyard showcases numerous rusting jets, tanks, and cannons captured from the American military machine.

Notre Dame Cathedral and Old Post Office: These constructions were built between 1877 and 1883, which are two of the best examples of classical French colonial architecture. Every stone used for them was shipped from France. 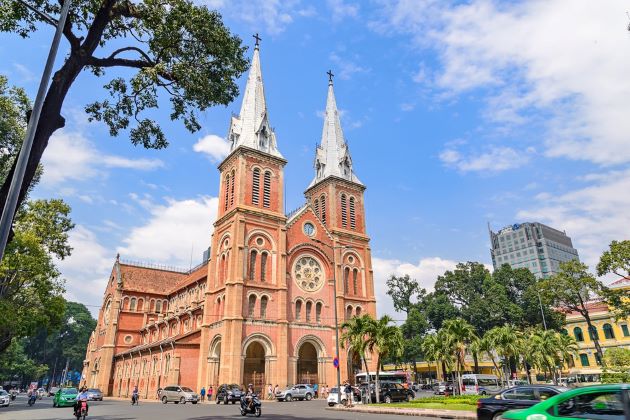 Jade Emperor Pagoda: This pagoda was built in the early 20th century in honor of the supreme Taoist god and stuffed with statues of phantasmal divinities and grotesque heroes. The pungent smoke of incense fills the air, obscuring the exquisite woodcarvings.

Enjoy your lunch at a famous Pho restaurant (Vietnamese noodle soup) before driving about 1 hour and 30 minutes to Cu Chi tunnels. Upon arrival, watch a video explaining how these tunnels were used to defeat American military forces.

You will have a chance to see some traps that were placed in the jungles to maim American soldiers and create panic amongst them. Then enter one of the tunnel entrances to have a real experience to imagine how Vietnamese people could live there for an extended period! 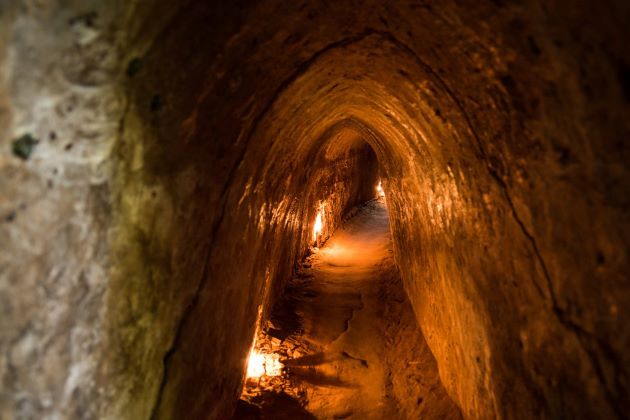 You can also visit a shooting range to try to fire an automatic or semi-automatic weapon (additional fee). Take some rest and taste Cu Chi boiled tapioca before driving back to Ho Chi Minh City for dinner and overnight.

After breakfast, your guide and driver will pick you up at your hotel and drive about 1 hour 30 minutes to My Tho – the heart of Mekong Delta. Upon arrival, board a motor-boat and cruise along with a vast network of canals and channels and enjoy stunning views of the great Mekong River, including four famous islands Dragon, Unicorn, Turtle, and Phoenix. 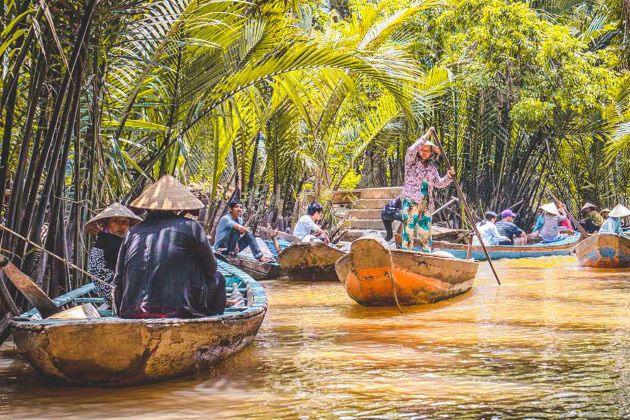 Stop at one of the floating fish houses with nets as well as wire baskets under their house and see the villagers cultivating freshwater fish and shrimp. Next, cross the river to reach traditional workshops to witness a step-by-step process on how to make sweet coconut candy and honey… 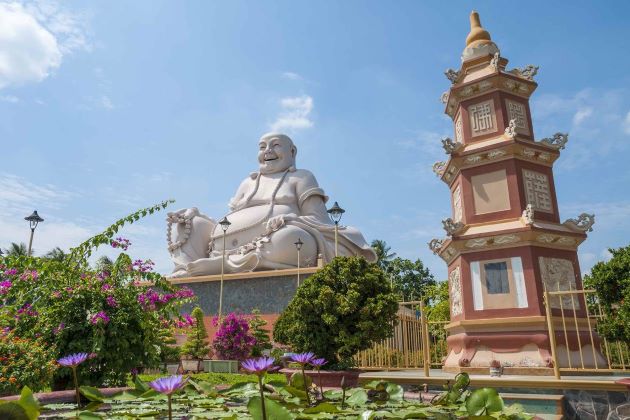 Afterward, transfer to local transportation called Xe Loi to travel throughout local villages. After lunch, take a rest before returning to My Tho. Drive to Vinh Trang pagoda built in the middle of the 19th century. Travel another 1,5 hours to return to Ho Chi Minh city for dinner and overnight.

Today is your free time before the flight to Siem Reap. On arrival, meet your guide and driver with a warm greeting before traveling to the hotel for check-in. The rest of the day is your leisure to explore the city on your own. Overnight in Siem Reap.

After breakfast, drive to Angkor Thom – the masterpiece of King Jayavarman VII which is built an impregnable fortress at the heart of his empire. Begin your visit at Bayon Temple of 54 towers topped off with the four faces of the Avalokiteshvara (Buddha of Compassion) 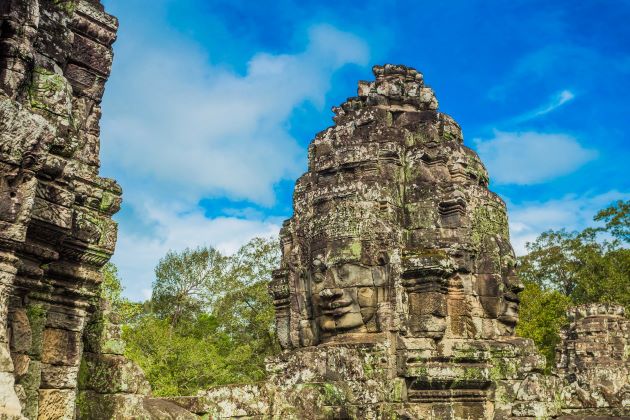 Continue to visit Terrace of the Leper King. It was the royal crematorium as well as the statue that is believed to be Yama, the god of death. Next, explore the Terrace of Elephants, originally used as a viewing gallery for royal families to preside over parades, traditional sports, and performances. Move to the southern to see the Baphuon, one of the most beautiful temples at Angkor Thom which is constructed in the 11th century.

Later, visit Ta Prohm which appeared in the famous movie “Tomb Raider”. This construction has been abandoned to the elements, a reminder that while empires rise and fall, the riotous power of nature marches on, oblivious to the dramas of human history. 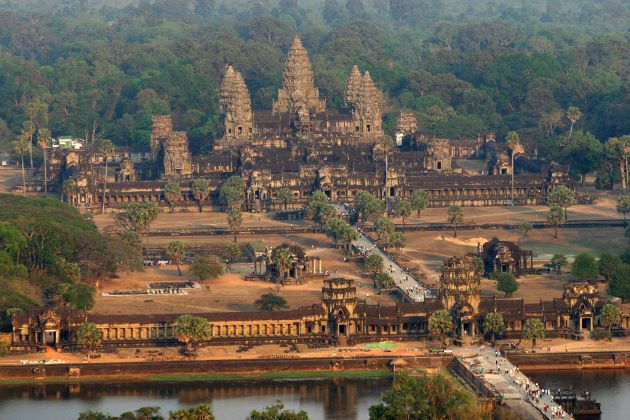 Afterward, journey out to the Angkor Wat which is believed to be the largest religious building in the world. This temple is the perfect combination of symbolism and symmetry together with a source of strength and pride for all Cambodian people. Dinner on your own. Overnight at the hotel.

After breakfast, depart for the Tonlé Sap Lake where you can enjoy a boat ride on the largest permanent fresh-water lake in Southeast Asia. You will have a chance to see fishermen’s floating villages, floating schools, and floating police station…Transfer back to your hotel and enjoy the afternoon at leisure. Overnight at the hotel 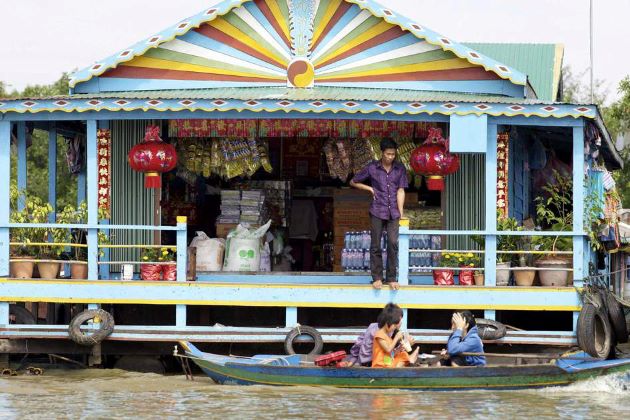 Enjoy your breakfast at the hotel before transferring to Siem Reap airport for the departure flight. Trip ends.

There are no reviews yet. 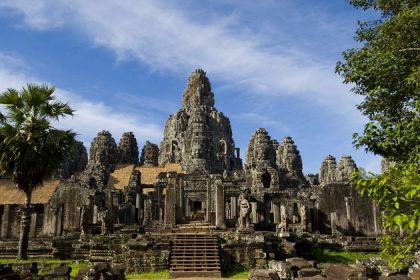 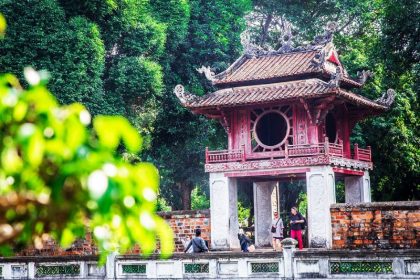 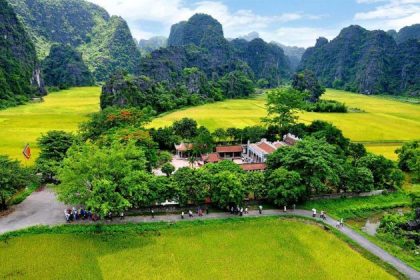